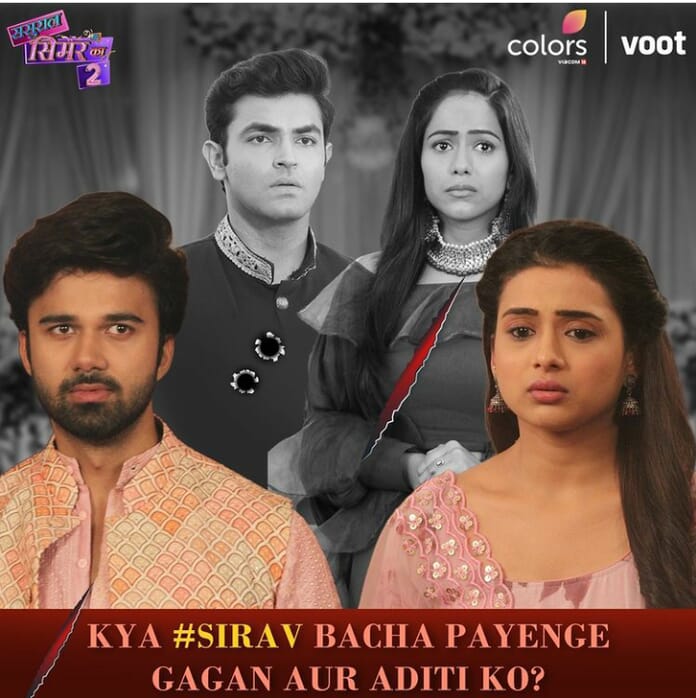 The episode starts with Geetanjali Devi checking the mud on Aditi’s sandle and on the floor. After checking it, Aditi is very nervous. Geetanjali Devi goes back to her room with Gajender and Griraj. Simar sees Reema, she comes to her and thanks her. Reema ask her how does she know. Simar tells her that she can understand her without hearing a word just like how she did. Simar thanked her for bringing back Aditi. While they were talking Aarav is coming towards them. Aarav then sees Vivaan sad and goes to check him. Vivaan is crying with Reema’s photo. Aarav tries to console him.

Simar tells to Reema why she is doing this, why she is hurting herself and Devarjee. Reema says to her that this is the cruel reality. The Oswal and the Narayan families are the two ends of a river they cannot meet. Reema feels bad for Simar and tells her that for her mistake where she is standing today. Reema tells to Simar that she cannot play a perfect Bahu, she just cares about herself. Aarav comes towards them. Reema tells to Simar to stop Aarav she will manage to go from there.

Reema then goes and checks her room, Vivaan is sleeping. She looks at him and feels emotional. She sees that he is sleeping with her photo in his hand. She apologies to Vivaan that she cannot stay with him. While sleeping Vivaan keeps his hand on Reema, she sits there. Gagan worries that everything must to sorted out there. He prays to God that Reema and Vivaan must understand each other’s and everything between them must be settled down.

Simar remembers Reema’s words, that she and Vivaan cannot be together as Aarav and Simar cannot be together. Simar agrees to her words. Aarav comes and tells her that he was worried thanks to God that they got back Aditi otherwise everyone was in tension. Aarav tells her that everone is loosing their love. Vivaan is loosing Reema. Aditi is getting married in few days then she will loose her love forever and even we are loosing our love. Simar tells him that if God wishes we are not going to loose our love.

Reema wakes up and leaves Vivaan sleeping. She turns and tells him that she loves him. She secretly goes to her car, Devesh was standing there. She sees her and gets angry and tells him that from night she is explaining him to leave her. Devesh tries to provoke her and in anger she confesses that she doesn’t love Vivaan she just used him to take revenge from Geetanjali Devi and wants to marry Aarav but now she felt for Vivaan and she started loving him.

Devesh records her confession on his phone. Reema tries to slap him yet he holds her hand and tells her that she should not do something like that. Reema tells to Devesh that may be in her family everyone is seperate but when time comes they fight together for each other. She also threatens him that if Vivaan will know about all these then what he will do to him he cannot imagine.

Aarav looks at Simar working in kitchen and imagines that he is dancing with her, he thinks it would be good if they both could stay together. Aarav then gets a call from Yamini she ask Simar to come for rehearsal within an hour. Aarav goes inside kitchen and tells her that he wants to help her cooking.

Devesh reveals to Reema that the miss india conspiracy she had, was done by Chitra Oswal. But Reema married his own son Vivaan. So he tells her that Chitra doesn’t want her to live with Vivaan she wants her to be out of his life. Reema realises the truth yet she ask Devesh that this is none of his business. She ask him to stay away from her.

Aarav helps Simar in kitchen preparing breakfast. Aarav then tells her that she is having her first rehearsal at Yamini house right now, Simar tells him that she have lots of work in the kitchen yet he takes her with him. While Reema is walking towards her car she gets injured on her head, when she turns around it was Devesh.