The episode starts with Parmeet says to all that they should demand Heer’s hand from Harak and Preeto for Virat without further delay. Virat refuses and tells them that Preeto is still not ready for this marriage, so they should wait a bit.

Sant jokingly says that if Preeto is not ready then he can kidnap Heer for Virat as well. Virat asks him not to think like a policeman every time but to think like a father and father-in-law so that he knows what is right and what is wrong for their children.

Mahi tells Preeto that Virat loves Heer very much and that they should get both of them married. Preeti is about to scold Mahi but Harak stops her and says that Heer will listen. Preeto takes Mahi’s  to the room.

Preeto says how many times she has explained to her and everyone that only love for a eunuch cannot erase her incompleteness. A eunuch who lives an incomplete life and they can never become someone’s entire wife, daughter, daughter-in-law and sister. But Heer is living in her house as an entire daughter and sister but if she gets her married then her condition will also be like Soumya who could neither become a wife nor daughter-in-law.

And there is no guarantee that Heer will be safe in Virat’s house because if someday Virat’s family comes to know that Heer is a eunuch then they will killed her and then what will Mahi do. Mahi says that dying or living is a game of luck in which she cannot do anything but she can say one thing with confidence even though Heer is incomplete but she will get Virat’s full love like Soumya got Harman.

Preeto expresses dissatisfaction with everything Mahi said and says that this house hers and she is disagree with Heer’s marriage and this is her final decision on which she does not want any more debate. Preeto leaves. Mahi tells Harak that at least he should consider it and take a right decision after thinking.

Virat remembers the day when Preeto told him about Heer’s secret. And since he cannot share this thing with Parmeet, he says that he himself does not even know what problem Preeto has with his relationship with Heer.

Mahi comes to Heer. She notice her in Soumya’s dress and thinks that she looks like Soumya. Heer says that if Mahi comes here on Preeto’s request then she does not want to talk to her. Mahi tells Heer to stand up. Heer asks why.

Mahi asks her to just stand up. Heer stands up jerkily. Mahi watches her from top to bottom. Heer is surprised by her strange behavior and asks what she is doing. Mahi tells that soon Heer is going to be a bride and she is taking her measurements for the wedding dress. Heer is astonished. Mahi says that she is happy with this marriage and  soon others will also agree to it. 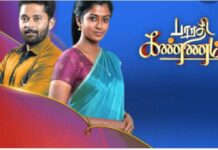