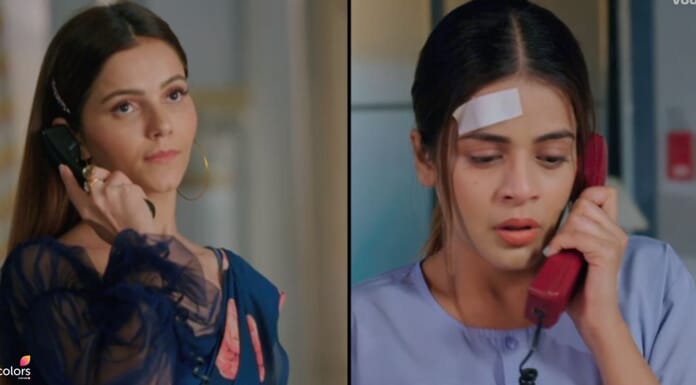 The episode starts with Guru giving alcohol to Virat. Virat says cheers and starts drinking. Heer thinks Virat might react insanely after consuming alcohol. Virat drinks one more glass of alcohol. Guru tells Virat that he likes Heer and she is very unique. Virat says he also likes Heer. He recalls his moments with Heer. Heer tries to overhear their conversation but fails. Virat notices Heer in club and assumes its his imagination. Virat is about to leave but Guru stops him saying why can’t he stay back. Virat says he is going to washroom. Heer hides seeing Virat.

Later she gets inside the club and asks for orange juice but the drink server makes a combo drink of orange juice and vodka. She drinks two glasses of it without knowing. She is about to leave from there but suddenly loses her balance due to alcohol effect. Virat holds Heer in his arms and she says she was thinking about Virat only. Virat says he loves her so much.

Heer in intoxicated state says they can’t reveal it to anyone. Virat says they should not be scared, they can tell everyone that they love each other. Guru bumps into a waiter. Virat and Heer get shocked seeing him. They hide and Heer says its their secret, they won’t tell anybody. They leave the bar together. Guru wonders where is Virat.

Virat and Heer tease each other outside. They see everything is flying. They are unable to stand properly. Later they start singing a song together and start dancing. After enjoying the moment they finally take a lift and return back home. They get inside their room and start laughing. Ahead, they fall onto bed together and fall asleep holding each other’s hands. Next morning they wake up. They wonder why they got headache. Heer says she only drank orange juice but she got hangover.

Virat laughs at her. He requests her to bring lemon water. Heer brings for him and Virat says their idea of revealing the truth was not that bad. Heer says thank God they didn’t confess anything. Virat teases her saying he will make her drink alcohol once he decides to uncover their truth in college. It will be easy for him to confess. Heer hits him with pillow and they both share a laugh. Heer calls him naughty.

Heer and Virat reach college and Virat says we should enter together, let the students know we are couple. Heer tells him to stop his drama. Guru and his friends will again create a scene seeing them together. Later Heer notices one girl in salwar. A person drops his books and the girl helps him in picking them up. Heer asks that girl who is she? The girl says her name is Geetu and she is here to collect her father’s salary who is a sweeper in college.

Geetu says her father is sick so for his treatment she wants money immediately but the college authority said her father already took salary in advance thus they cant give her money. Geetu says her father is alcohol addict. Heer says she can help her by giving money. Geetu replies she doesn’t want any favor, she was just sharing her problem with Heer casually. Heer further asks if Geetu has any kind of job or not and the latter says she used to work somewhere as a caretaker but the family shifted to foreign country so she lost her job.

Geetu says she is expert at doing household chores. Virat wonders why Heer is not in the class. He finds Heer is talking to a girl. Heer calls Virat and the latter wonders why is Heer calling him in front of everyone. Virat tells Heer what happened. Heer says she wants to hire Geetu as a maid in their house. Parmeet will get some help as they both come to college. Heer says she is fully convinced after seeing Geetu’s kind nature, she likes to help others. Geetu asks Heer is she married and wife of Virat? Heer and Virat tell her to not speak loudly else everyone will get to know about their secret. Heer tells Geetu to come with her in their house.