Yesterday the whole cast & crew of “Shakti ” show  – which is being telecast on Colors TV & starring by ( Vivian Dsena aka Harman , Rubina Dilaik aka Saumya , Kamya Punjabi aka Preeto ….etc ) – were celebrating completing 700 successful episode of the show..

After witnessing a huge incidents twist with the death of “ Surbhi” -Saumya’s sister- & Saumya becomes a mom for her sister’s son whom they named “ Soham Saumya Singh” , also we have seen a new Family enters the show as “ Preeto’s -aka Kamya Punjabi- Brother & his family ” Who returned to avenge Harak’s  family for putting him in Jail ..

Now & according to the statements of “ Rubina Dilaik” aka Saumya Singh & the latest spoilers there’s a new happy track for “ Haya” & their fans as well as Harak Singh will accept Saumya as his daughter in law along with Soham as his grandchild too & there will be a huge celebration in which Harak will officially accept Saumya finally ..

We also have to mention that the show finally came back on the lead of it’s time slot according to the Latest TRP ..

So what will come next?! & Where’s this new twist will take the show to ?

Let’s See & we will sure keep you updated.. 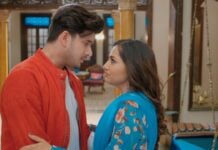