JustShowBiz
More
Home Interviews Interviews of TV Celebrities Shardul Pandit talks about his college life!
Facebook
Twitter
Pinterest
WhatsApp
Follow us on Google News
Actor, anchor, VJ, RJ; Shardul Pandit has donned a lot of hats in his career given his young age. In a freewheeling chat, Shardul shares his early years and some rather interesting anecdotes about what all went into the making of a successful human being and a go-getter…

1. Tell us about your college life..
# I studied MBA in advertising and PR at IIPS Interntational Institiute of Professional Studies. Since it’s a part of Devi Ahilya university, it’s a part of the heritage and culture of Holkar state. It has huge open spaces, plush green gardens and one storeyed buildings. Its quite a walk but can feel you are in country side. It had very positive ambiance all around.

2. What was the first day of college like? Were u ragged?
# It was actually funny because even before that I was on RADIO MIRCHI as the morning host. For some strange reason, two of my teachers came up to me for an autograph and telling me they are my fans on the very first day! It was quite embarrassing and some students thought I might not be easy to talk to, but by lunch time we were all buddies  because they realised that I was just a kid who happened to be famous. With time everyone became pally and life was amazing.

3. What were your professors like?
# Some were extra sweet and some were extra tough on me depending on their perception of me since I was known in the entire city owing to my radio and part time TV work. Though I did have some advantages and some disadvantages, I don’t have any complaints. I mean, I was allowed to sit for exams even though I could not finish my required attendance, which I won’t recommend anyone try. But on the whole, my Professors were encouraging and motivated me to follow my dreams.

4. What were the studies like?
# Studies were fun for me as what we were taught, I was already applying on a daily basis in planning, writing, desgining my shows and even marketing. Till today, I can quote concepts like the back of my hand. Studies have to be fun and contribute to one’s growth.

5. How did u travel to college?
# I travelled by my bike because the two or three days when I went in my car, I got that ‘He thinks he is a star’ look. Plus bikes are great in colleges because I would sometimes drop pretty girls home and the feeling was great. I am sure the students will know what I am tallking about. These memories make me nostalgic even today.

6. What was the college life like?
# I wish I could live more of it, since i started working right after school because at that time private radio had just launched. So, the kind of fame we enjoyed was unparallaled. I never got a normal treatment from most students. Some were too nice as they wanted to be friends with an RJ and some were too aloof, as they thought I might not make them friend. It was only much later they realised I was a normal bloke.

7. What were your favorite eating, meeting, and  socializing places back then?
# There was this canteen in our college. It wasn’t fancy, just a really small place where we had only 4 or 5 options to eat but obviously it was our hangout. Also, right outside our campus on the outskirts were the so called ‘dating’ hang outs where most students, including me were found (laughs).

8. What were your friend circle like?
# I had only two good friend in my whole time. Besides, the other circle as I said, was of people who knew me but never found the courage to talk to me. I was social but I took time in making close friends. Because I believe that friends are a very important part of one’s growing up and even, life.

9  Did you play any pranks back in college?
I did actually. I once took soap in my mouth, made made foam and fainted in front of a girl faking an epilepsy attack. You had to see her face. It was like she saw a ghost!

10. What was your take from college life?
# What I’d say is that I seriously believed that if I could dream, I could do it. This was my favourite quote at that time and it still is. Also, college life gives one a sense of freedom and exploration. One must enjoy college life to the fullest. When you meet variety of people you learn new perspectives.

11. How has your education helped you in your career?

# I have said this repeatedly, and I cannot insist how important education is. As actors people think going to the gym or acting classes will do the trick. But when I am chatting up with the biggest celebs like SRK, Amitabh Bachchan, Ranbir Kapoor and others, you have got to be sharp. Your looks don’t get you far. Its what is behind that face, will. A personality is shaped with education, not make up. Education gives you a lot of confidence and a positive attitude to have correct perspective and vision. Education should be given priority, always. The current generation must pursue education even if they want to make a career in entertainment industry. 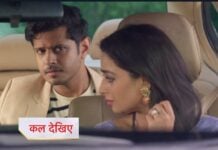