Follow us on Google News
Since the time the show came on air, it was always in the news. Now the show has been winning the audience’s heart also. For the last couple of weeks, Kasautii Zindagi Kay has topped the chart.
Speaking on this triumph Shubhaavi who plays the evil Mohini Basu says,” I am extremely happy that we are No 1. Consecutive days of 15-17 hour shooting have paid off very well indeed… But as always I give the primary credit to our director( Muzzu)as he is the captain of our ship. Moreover, there is Ramadan going on, despite that there has been no difference in work. It is as energetic and as beautiful as it has been so more respect to him and his entire team.”
Sahil Anand who plays Anupam Sengupta also echoes the feeling and says,” I am very happy that our show is number one in the channel. In between, there were shifting of TRP’s but am happy that we are performing well. We are putting our hard work. Thanks to Ekta Kapoor to bringing this in front of the audience. I guess the unpredictable twist and turns are working for the viewers.”
Comments 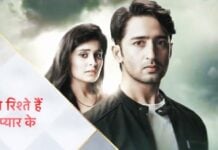