Episode begins with Rani was about to see her picture in Mihir’s room but before she sees it he drags her and pins her to the cupboard by holding her hand tightly and she drops the picture. He thinks he has to do something before she sees her picture and get close to her and asks what is she doing in his room and says seems like she starts to think about him.

.She gets angry hearing him. He tells her to understand that he doesn’t allows anyone to interfere in his life. She says she also doesn’t want to interfere in his personal life, it’s just that he is fasting for his wife so she thought to surprise him by arranging a meeting with his wife but she doesn’t know that he is thinking about her like this and says she never had feelings for him and leaves from there. He takes her picture and says she thought about him at least for surprise and kisses her picture.

Gunvant and Kirtida struggles with pain and tries to untie the ropes and gets successful in it. Utsav asks Kesha about his parents. She says they went to attend Karwachauth pooja. He asks did his mother asked her to keep fast. She says his mother didn’t said anything but she herself keeping fast. He says what’s the need of it when the marriage was not normal like others and also it can affect her child.

She says she feels like he is still angry on her for whatever she did with Rani in the competition. He says he was angry but not anymore, he forgave her the moment she accepted her mistakes in front of everyone and says he doesn’t even has rights to get angry on her and moreover their relationship is not true and this child is not his child.

Rani was getting ready saying today she will see the moon with him and Raja helps her. She hears Asha’s voice and assumes Raja is here and runs towards downstairs happily without caring about anything. She shocks seeing Raja portrait there. She gets emotional touching Raja’s face. Asha says he knows that Rani will miss him today that’s why he sent it to her.

Rani says she is going to the hospital and will complete her fast there. Asha says just 15minutes left and tells her to complete the fast following all the rituals. Rani leaves from there. Mihir who overheard everything from upstairs says she belongs to him from years and she kept fast also for him when she is in front of him how can he lose his love and calls someone and tells that person to get ready to execute the plan.

Kirtida and Gunvant realises that their room door is locked from outside. Kirtida calls Darshana. Gunvant says they can easily fool Darshana with this emotional speech. Kirtida tells her to open the door saying she is feeling weak because of fast and also has to complete the fast by seeing the moon. Darshana was about to open the door but Hitank stops her saying they deserves this punishment for what they did with Raja and takes his wife from there.

Gunvant says Hitank is angry so let’s not do anything wrong for few days. Kirtida says but this time they did nothing. He says she is right and someone putting the blame on them and they has to find out who is doing all this because whoever it is that person is Raja’s enemy. Mihir says today Rani will complete her fast by seeing him only. One guy gives courier to Asha. Hitank says someone send gift for her. Mihir smirks seeing that. 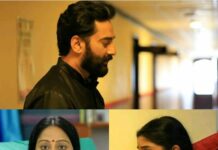 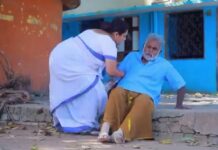