Popular, talented and handsome telly-town hunk Sourabh Raaj Jain, who is heartthrob of many people, after winning many hearts by his spellbound performance as Lord Venkateswara in his devotional telugu movie Om Namo Venkatesaya, is all set to win several hearts in Hongkong and China again. Om Namo Venkatesaya is a beautiful devotional movie which has been made in the magical combination of director K. Raghvendra Rao and actor Akkineni Nagarjuna. The devotional movie is ready to hit theaters again, but this time in Hongkong, which in itself is a big thing because Om Namo Venkatesaya is the first movie which is going to be released in Hongkong and is creating history. Not only this but also Om Namo Venkatesaya is the fifth Indian movie to be released in China after Three idiots, Fan, PK and Bahubali. Excited about this Sourabh says, “I am really happy and excited about it.”

Just Showbiz is wishing to the whole team of Om Namo Venkatesaya all the success, may the movie get more and more huge positive responses and appreciation as it got recently.

For more such stories, Let’s Get Buzzing!! 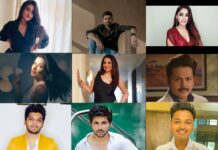 World Party Day, is celebrated on April 3 each year