Star Plus fresh launched show Shaadi Mubarak manages to create quite a buzz right after its launch. The brilliant portrayal of characters and the power acting already impressed a massive set of audience. The show deals with the lives of a middle-aged couple Preeti and Keertan.

Earlier it’s seen that Preeti decides to leave the house and go back to her Bundi house in village but learns that Tarun has sold it. Now it will be seen that Tarun will throw Preeti out of his house and Juhi takes her in.

In the previous episodes, it’s seen that Preeti sells the almirah to KT in order to use the money for buying the car Tarun wished for. On the other hand, Rati finds her boss’s ring on the floor and decides to steal it as they are in need of money to buy the car. She puts the ring in Preeti’s bag who came to give Tarun is a phone. She sends Preeti away but Preeti stays there to help one of the employees.

During checking Preeti gets caught while Tarun and Rati makes her the scapegoat for escaping themselves. Everyone in the company badmouths Preeti and she gets shattered. Later Preeti decides to leave the house and go back to Bundi house only to know that Tarun has sold it in order to buy the new house.

In the upcoming episodes, it will be seen that Preeti feels stressed and couldn’t even eat recalling all the happenings in the house. Her saree flies and falls on the fan and she tries taking it. KT who comes there to return her keys misunderstands her that she’s committing suicide and asks her not to do so. Preeti who’s stressed falls down unconscious in his arms. Later Tarun insults Preeti in front of Juhi and Sumedh and throws her out of the house. Juhi takes her mother with her to her house.

Will this acts as a pushover for Preeti to stand independent? Will Kusum accepts to take Preeti in?

To know what will happen next in your favorite show Shaadi Mubarak, stay tuned to this space. 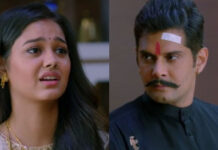