Chemistry between leads in Indian Television can make or break the show. That is the power of a pair. These days every new show is trying to star a fresh pair to attract the audience without any judgement. It won’t be wrong to say that many of these experiment is working too.
So, let’s have a look at these pairing which are making audience skip a beat every time they come on screen.

Mallika Singh and Sumedh Mugdalkar are a pair who play the divine Radha and Krishna respectively. The innocence and the calmness that they bring on screen while living their characters made audiences fall in love with these two. Today, this pair is the face of Radha Krishna.

Namit Khanna and Surbhi Chandna were a pair when announced, many people were skeptical. A lot if speculations were going on around if they would be compatible on screen and if they will work but SidIsha is a prominent fandom today which is growing day after day.

Kasauti Zindagi Kay saw a fresh pair during the start if the show with Parth Samthaan and Erica Fernandes coming together for the show. The fans warmed up to them even before the show started and their electrifying chemistry as the show progressed just added to the excitement.

And now as Karan Singh Grover and Erica Fernandes’s story as Mr.Bajaja and Prerna is progressing, its finding its own audience and is clicking with even non-watchers of the show.

Kahaan Hum Kahaan Tum marked the end of hiatus of two prominent faces of the TV, i.e. Dipika Kakkar and Karan V Grover. This was a pair that swept audiences off their feet since the first episode and them rooting for their pair and characters since the start.

Even though Shaheer Sheikh and Rhea Sharma are the main leads of the show and are the title pair, the parallel leads Ritvik Arora and Kaveri Priyam playing the siblings of the main leads were able to attract the audiences to their story with the chemistry and comfort they bring on screen. It’s no easy feat but they manage it marvellously.

Shaheer and Rhea are ofcourse the apple of the eye of viwers’. This unsual pair and set of characters are worth million bucks for their fans and they can’t stop raving about these two. Harsh Rajput and Niyati Fatnani are a couple who have made their mark silently and are being loved by fans for their awesome work and freshness on screen.

These fresh pairs really make us fall in love with them over and over again and we just can’t get enough of them. Which pair is your favourite?
Comment your choices and tell us what you love about them! Till then let’s get bizzzzzziiiiinnnnn’!!!! 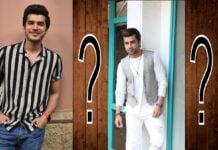 Actor Paras Kalnawat and Aashish Mehrotra to get paired opposite to...