Indian Television shows are always high on drama and we surely enjoy watching the intense scenes. But few scenes in the show are so over dramatic that in a serious situation they makes the masses laugh their heart out. Thus, here we are listing top 5 over-dramatic scenes of ITV; pick your favorite among the listed scenes below!

Top 5 over-dramatic scenes in the history of ITV!

Saath Nibhaana Saathiya: When Gopi Bahu cleaned the laptop with soap and water

Gopi is portrayed in show as the illiterate character who got married to Ahem Modi a business tycoon. Her sister Rashi has envy with her and to defame her when Ahem asked Gopi to clean his laptop. Rashi instigate Gopi wrongly. Gopi then cleans Ahem’s laptop with soap and water. And the scene turned over-dramatic when Gopi hanged the laptop to dry. Audience’s reaction for this highly dramatic drama was same as Ahem’s reaction. This scene has a separate fanbase and scene is hit even now.

Colors show Saural Simar Ka is next level show all together and so as the scenes of the show. Now, if you remember the scene when character Pari got a slap from MataJi. Scene goes like this Mataji slaps Pari once and Pari twirled thrice and wrapped her throat with a curtain out there much to Mataji and Bharadwaj’s shock.

Well, without any doubt this scene was extremely funny and over-dramatic to digest. Don’t you agree with us?

It just came across my feed and I couldn't stop myself from appreciating the excellence in the scene..best😂😂😂😂😂😂😂😂😂😂😂😂 pic.twitter.com/e2SMJO6JPd

Kundali Bhagya every week fetches audiences’ attention with their gripping storyline. But in the recent episode of Kundali Bhagya the accident scene was highly funny. Yes, funny because it was next level creativity.

Scene was Sherlyn and Maira plans for Preeta accident. Preeta walks on the road and Maira pushes Preeta towards the running truck, seeing Preeta in danger Srishti pushes back Preeta and Preeta loses her balance and pushed back Maira. Maira gets injured in the whole 360 degree accident drama at last. This serious accident scene turned out much over-dramatic and hilarious. 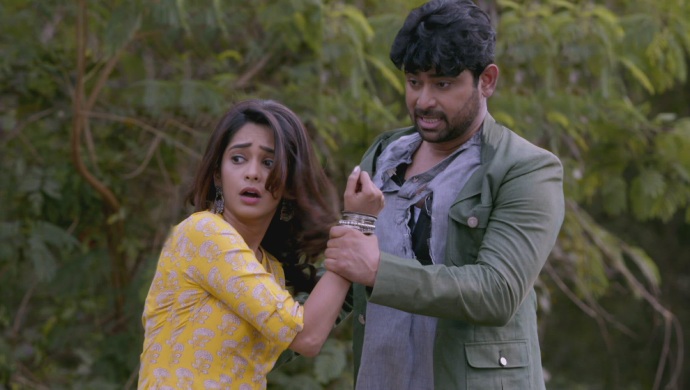 Along with stretching he tracks and closely repeat the tracks, Ekta Kapoor shows have amount of hilarious scenes in the shows.

In the past recent episode of Ekta Kapoor shows Kumkum Bhagya; cliff falling scene was beyond the creativity. Scene goes like this; Prachi slaps Sanju after Sanju’s truth was out that he was the person behind defaming her in front of the college. Abhi and Ranbir decide to send Sanju to the jail. To escape from Abhi’s trap Sanju holds Prachi and jumped with her from the cliff but drama starts from there when Prachi in the air pushes back Sanju and holds the rod, while Sanju falls under the water.

Well, also this! You think your one can top this?

Omg! This Zee show scene was heights. The way Vivaan jumped, rushed and slided in Shahrukh Khan style to save the falling Meera; nothing can match this creativity level.

Tell us in the comment section below, which is your favorite over-dramatic scene!