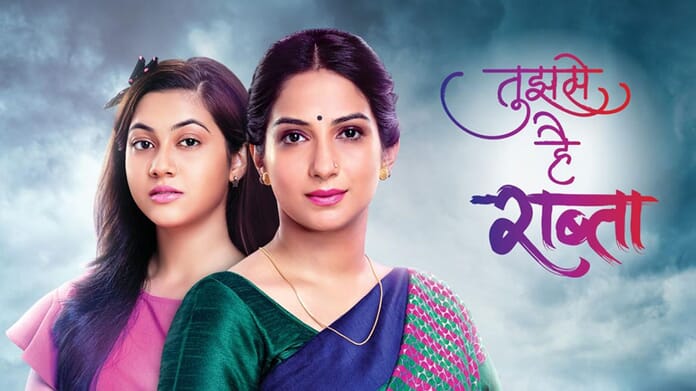 Episode starts with Kalyani says she will search her Moksh saying it’s her goal in life and prays Goddess to give her courage to found her Moksh and promises to Goddess that she will found her Moksh before the end of Navaratri. Aaosaheb asks Anupriya to go for her exam. Kalyani says she will take Anupriya and Both goes to exam centre. Kalyani gives suggestions to Anupriya and wishes her saying she can do it. Malhar meets Kalyani outside the court and says that he traced the number and it’s belongs to Yashwant. Kalyani says they can get clues from this person and both goes to meet him.

Anupriya checks the paper. Sarthak pours water on her ,she gets shocked. Sarthak asks why she wants to become lawyer and says she have only one hour left. Anupriya writes her exam knowing time is less.

Yashwant Informs unknown lady that Malhar and Kalyani reaches to his place knowing that we used to threaten Mehras after Kidnapping Moksh and I joined my men in Pune hospital and sended them to that place and they will go to check him and we have to vacate from here before they caught us. Lady assures him that Kalyani will never get her Moksh location.

Yashwant daughter Swathi tries to escape from her marriage with jewellery and she classes with Kalyani. Kalyani recognizes her and questions how can she ran away from her marriage after knowing her Dad is admitted in hospital. Swathi says my Dad is at home and making arrangements me to get me married to some goon that’s why I’m escaping.

Kalyani about to question but Swathi leaves in her scooty throwing Kalyani. Kalyani thinks their is true that these are hiding something and enters bride room and informs everything to Malhar on call. Malhar asks why you went to Bride room? It’s risky. Kalyani says she just went to check and asks him to come immediately and Malhar says he have plan but Kalyani phone gets switched off.

Goons knocks Swathi door and when they didn’t get any answer they broke the door. Kalyani gets tensed and wears Bride dress to escape from them. Goons says why she didn’t open the door. Kalyani manages saying something and asks them to take her to her Dad. Goons says Yashwant will come for Kanyadan and leaves after locking the door.

Goons informs to Yashwant that Swathi is in room. Yashwant asks his men to keep Chanchan name as secret and asks him to get the info when Malhar and Kalyani reached to Pune.

Sarthak takes Anupriya papers early and throws her papers writing she’s fail and asks her to show those papers to Kalyani. Sarthak gets Malhar call and gets to know about Yashwant and Malhar plan. Kalyani thinks to something and waits for Malhar arrival. Goons take Kalyani for Pooja.

Malhar and Pawar changes their attire and enters the venue as cooks. Pawar says sorry sir, Everyone is busy with Cm duty. Malhar says it’s fine and they sees Sarthak  coming in tempo. Sarthak goes to Malhar and asks what’s his plan.

Malhar says they have to make everyone Unconscious and than he sees Anupriya in changed attire like them. Sarthak asks what’s she doing here. Anupriya says she came here after hearing Sarthak convo with Malhar and asks them to join in their team for Kalyani. Sarthak denies but Malhar agrees to join her. Goons asks Malhar and his team to make arrangements in kitchen. Malhar asks him to show the water and other things. Goon takes him.

Kalyani prays Devi Maa for her help. Pandit asks bride to leave handprints on wall. Kalyani completes it and says that she leaves Handprint near every door wall. Pandit says it’s not needs but she says it’s her wish. Pandit agrees. Kalyani gets beep sound indicating that her heart is beating fast like Malhar is near her than she sees Malhar beside her.

Malhar thinks Bride ran away than who’s she! Is Kalyani in Bride dress? Than goon shows water to Malhar and takes him. Goon about to accompany Bride saying it’s Yashwant order but she denies to take him with her saying she is going to bathroom.

Pawar gives powder to Anupriya which can make these people Unconscious. Kalyani drags Malhar aside and inform him about her plan to search each door. Malhar says it’s risky. Sarthak and Pawar makes some men Unconscious and places them in tempo. Goon searches for Malhar. Malhar says to Kalyani that Anupriya and Sarthak are placing Unconscious men in tempo. Kalyani asks what Aayi is doing here. Malhar assures that he will take care of Aayi and asks her to be careful and leaves. Goon sees Malhar and asks him to do the kitchen work.

Malhar goes to kitchen and informs them that so many goons are inside. Anupriya gives juice mixed with sleeping pills to make Goons Unconscious and asks Malhar about Kalyani. Malhar says Kalyani is in bride dress. Anupriya gets tensed for Kalyani.

Kalyani leaves handprints and searches for Yashwant. Otherside Yashwant asks his men to enquire about Kalyani and Malhar saying until now they didn’t go in Pune way and he misses to notice Kalyani face in CCTV footage.

Anupriya serves juice to everyone. Goon asks his men to give juice to their Malik at basement. Kalyani thinks Yashwant is at basemant and tires to go but Goons stops her saying she can’t move anywhere. Kalyani sits down in sofa. Anupriya goes near her and asks Kalyani to write message in tissue paper.

Kalyani writes message and gives to Anupriya and Anupriya gives that message to Malhar which shows Basement and Backdoor. Malhar says maybe Yashwant is at basement and he goes to get him. Goons feels Dizzy. Kalyani moves from that place. Malhar enters to Yashwant room breaking the door. Yashwant aims gun at him. Malhar handles him and asks for Moksh details placing Rope around his neck. Kalyani reaches to that room.

Other goon enters room and asks Malhar to leave the Yashwant aiming gun at him. Yashwant and goon makes Malhar Unconscious and Goons reveal that this person is Malhar Rane and reveals that how he caught them taking their men in tempo mixing sleeping pills. Kalyani says she came to here to check her Dad after doubting that juice. Yashwant asks his goon to make arrangement for marriage.

Other goons informs that they tied them in one room, Yashwant asks them to take Malhar in that room and asks is Kalyani is part of those people. Goon says no than Yashwant asks Swathi to come with him. Kalyani thinks to do marriage to found her Moksh.