Yaaradi Nee Mohini is a Tamil TV drama series about Vennila, a village girl, and her love for Muthurasan. But will Nambothri, who hates Vennila for being poor, separate Vennila and Muthurasan?.

All these questions will be answered in the upcoming episodes. To know what is going to happen next in your favorite show
Yaaradi Nee Mohini, keep watching the serial and stay tuned to this space for new daily updates. 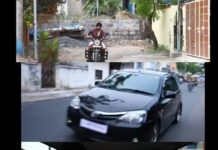