Episode begins with Mishka apologize to Preesha for disturbing them. Saaransh treats Preesha’s injured hand and she feels overwhelmed seeing that. Rudraksh comes there and asks what are they doing. Saaransh tells Rudraksh about Preesha’s injury. Rudraksh teases Preesha saying they have to go to hospital to treat her injury. Saaransh gets worries hearing that. Preesha tells Saaransh that Rudraksh doing masti nothing else. Then Rudraksh cheers Saaransh and makes him laugh. Later Preesha wakes Rudraksh at 3am and tells him that she have to go to hospital for emergency and asks him to take care of Saaransh because he have online workshop which is so important for him. She leaves from there.

Preesha comes to house and asks Rudraksh about Saaransh seeing him missing. She gets the note of saying he went for jogging with Niketan. She scolds Rudraksh for being lazy. They gets message from Saaransh saying they will get punishment for always fighting. Preesha gets worried about Saaransh and Rudraksh consoles her. They asks Sharda about Saaransh. Sharda says they should have worried about him before fighting with each other always. Sharda shows the video message of Saaransh to them. In that video Saaransh says they never listens him but always expected him listen them. He asks them to spend time with each other and share each other’s personal secret too. Preesha asks Sharda about the place where Saaransh is hiding. Sharda denies to tell the place.

Rudraksh and Preesha blames each other for their fights and starts to fight again. Mishka says Ahana going to make video for school then why she asked her to get ready that too especially wearing this particular necklace. Ahana asks her to stop asking questions and says the necklace should be visible properly in video. Vasudha sees the video of Ahana and shocks seeing Mishka wearing her necklace. Sharda calls Saaransh and informs him that Rudraksh and Preesha spending time with each other instead of fighting. Saaransh gets happy and says his plan worked. Mishka asks how Vasudha’s necklace reached here. Ahana says that is surprise and asks her wait to see the drama.

Precap – Niketan asks Police officer that who can kidnap Saaransh. 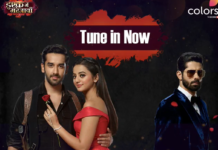 Kumkum Bhagya 10th August 2020 Written Update: Riya plans to use the misunderstanding of Pallavi in her favour