Episode begins with Arjun calls Mahima and asks her about his wife’s whereabouts saying he did everything she told him to do. She tells the location to him and says he should leave the city with his wife and warns him to not return or contact Rudraksh or Police otherwise she will kill both of them. He gets afraid and says he has nothing to do with them and says they won’t return never.

Later she says now Preesha can’t bring any proof against her and she will make sure that Rudraksh can’t separate from her then calls Journalist Chetna and introduces herself as Rudraksh’s wife and tells her to take her interview with Rudraksh. Chetna agrees for the interview and wonders what happened between Rudraksh and Preesha.

Mahima says now Rudraksh has to accept her as his wife. Preesha wonders why Arjun changed his statement suddenly and says Mahima would be behind that and gets worried thinking who will expose Mahima now. She sees another name Gautam who conned by Mahima. Gopal comes there and says Vasudha told him everything and says it’s such a big blame. She says she is telling the truth but don’t know how to prove him. He says she need not to prove anything to him because he trust him then she hugs him.

He says he is father of Mahima and knows about her that’s why he opposed when they took Mahima to Khurana house and says one say Vasudha will understand everything. He asks why she is staying here leaving Rudraksh because he knows that she can’t marry Yuvraj and loves Rudraksh and asks her to tell the truth to him. She says she didn’t marry Yuvraj and says she is doing everything to expose Mahima and tells Mahima’s truth to him. He says he is with her. She shows the diary to him. He says he once met this Gautam once already.

Mahima informs Rudraksh that Chetna invited them for her show ‘Chat with Chetna’. He says Chetna will ask him about Preesha so he doesn’t want to do that interview. She says she already agreed for interview and says everyone should know that how much he hates Preesha. He agrees to do it. Preesha calls Gautam and talks about Mahima and reveals that Gopal is their father. He says he knows Gopal but he was not aware that Mahima is his daughter. She asks him to help them to expose Mahima by telling everything to Police. He says he is waiting to punish Mahima only.

She tells him to reach Delhi as soon as possible. He says he is busy with his business meetings so Preesha says she will reach him. Saaransh got to know about interview. Preesha informs Rudraksh about Gautam so they has to go to Mumbai today to collect proof against Mahima and says she told everything to Gopal and he is with them. Later he tells Saaransh to do something saying he can’t give interview. Preesha and Rudraksh reaches Mumbai and meets Gautam. Gautam tells how Mahima cheated him and shows her picture saying he was waiting to punish her only. Preesha records everything and thanks him. 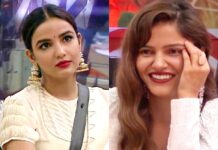