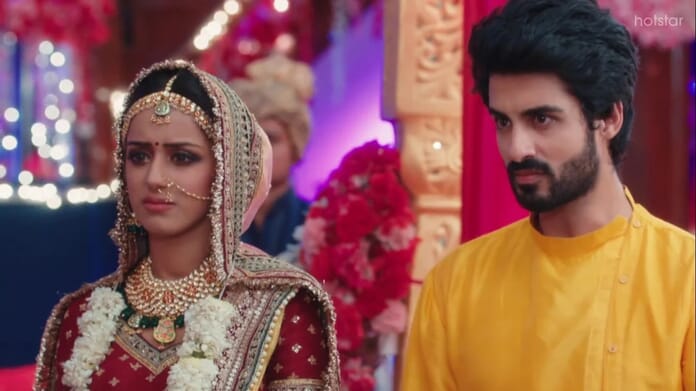 Star Plus show Yeh Hai Chahatein is always on top because of the interesting storyline. The twists and turns of the show have glued us to the screens. Now, Armaan decided to stop Preesha from leaving Thakur mansion so it will be intriguing to watch that what going to happen in the future episodes.

In the current episode, Sania reveals that she abducted Ahana and Mishka from airport. Preesha asks her that does the latter already knows that Krishna is Saaransh. Sania nods at her and reveals that Ahana approached her for Saaransh’s plastic surgery because her is boyfriend is a plastic surgeon. She tells that Ahana offered a huge amount so she told her boyfriend to do Saaransh’s surgery. Preesha slaps Mishka and asks her about bomb blast. Mishka reveals that she arranged dead bodies and left for London with Saaransh.

Ahana tells them that she tried a lot to open Saaransh’s trust fund but she could not that’s why she returned to India with Mishka and Saaransh. Armaan records her confession. Rudraksh asks Ahana that why Saaransh don’t remember them. She informs him that she gave strong medicines to Saaransh to erase his memory. Preesha slaps Ahana continuesly for torturing Saaransh. Ahana tells her that Saaransh is no one to her. Armaan informs Preesha that he recorded their confession and called the Police too. Police comes there and arrests Ahana and Mishka.

In the upcoming episode, Rudraksh and Preesha will decide to focus on Saaransh to make him remember the past. Later, Armaan will say to Sania that she destroyed everything so from now on he will do what he has to do. She will ask him that what can he do. He will tell her that still Preesha is with him. Sharda will try to take Preesha to Khurana mansion. But Armaan will stop Preesha saying that he won’t let her go.

Will Saaransh remember the past? How Rudraksh will react now?