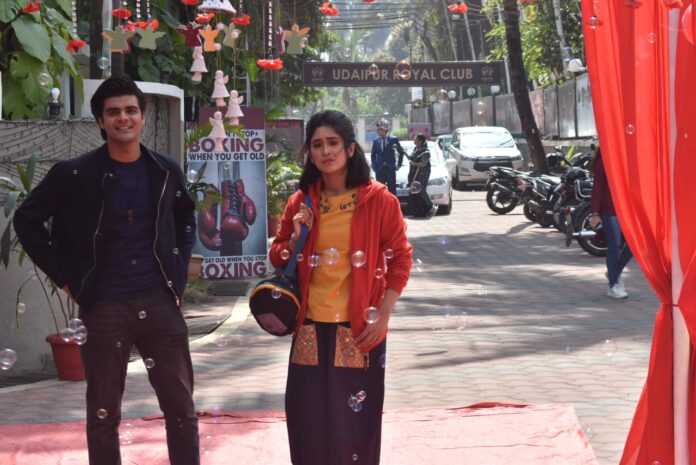 Today’s episode starts with kartik looking at his picture with Naira. He see Kairav making drawing of Sirat. Kartik talks with Naira’s picture and says she stays in Kairva’s heart but in his eyes he has stored Sirat. He looks for a way to restore Naira’s memory in Kairav’s heart. Kartik thinks Naira is just not a face but a feel. He says he need to do something that Kairav only recalls about Naira and not Sirat. Here, Sirat talk with Mauri and tell about her boxing match. Sirat says she is a fighter and will give a tough fight. Mauri asks Sirat to stay back at Udaipur as she has a birthday too. Sirat recalls her childhood and asks Mauri why she made her recall about her birthday. She quotes she don’t want to celebrate her birthday as Sheela left her alone on the same day. Sirat gets emotional and says she don’t want to celebrate her birthday. Mauri says but she wants to celebrate her birthday. She adds post she will come Rohan and they will do party. Rohan ask to talk about match. Sirat says she don’t want to do any party. Mauri says she has to because they don’t know it would be her last birthday with her. Sirat scolds Mauri for her talk.

Other side, Karitk convince Goenka’s for his anniversary celebration with Naira. Goenka’s find it odd. Luv Kush, Rhea and Gayu support Kartik and decides to plan for Naira’s and his wedding anniversary. There, Sirat think to focus on her match. She later decides to make Kairav understand that she is not his mother. Here, Kartik think tomorrow they will only talk about Naira. Ahead, Suhasini shares a talk with Manish. She tell she don’t know why Sirat’s face is like Naira. At midnight, Rohan, Mauri celebrate Sirat’s birthday. There, Kartik eat kachori and wish Naira’s portrait happy anniversary. Other side, Mauri asks Sirat to smile for her sake. Sirat does.

In the morning, Kairav reads Kartik and Naira’s anniversary celebration invitation. He gets happy. Kartik bring clothes for Kairav. Kairav says to Kartik that on his anniversary day, Naira will come too. Karitk think after today Kairav will not recall about Sirat ever. Ahead, Sirat goes to Udaipur Royal club. She recalls about Kairav’s talk. Sirat says she will think about Kairav later. Rohan asks Sirat to come along. In the meantime, Kartik and Goenka’s gets ready for the party. Rhea compliments Kartik for being a good husband and call Naira lucky. Kairav asks Kartik if Naira will come or not. Karitk says yes today Naira’s memory will come. Kairav gets excited to meet Sirat. Sirat prepares for her match. Rohan support her.