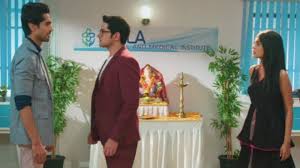 Star Plus longest running show Yeh Rishta Kya Kehlata Hai is up for high end drama in the show.

Akshara and Abhimanyu’s life seems to turn around and major differences is awaited.

Kairav as usual don’t like Abhimanyu much for his own reasons of making Akshara shed tears.

Kairav loses his cool over Abhimanyu again and it’s going to be dramatic this time.

Akshara will stop this face off of Kairav and Abhimanyu, asks Kairav to keep out of her personal matter.

Akshara tells Kairav that she is strong enough to take her own decision and will handle her own relationship and he need not interfere.

What will be the consequences of it and will Kairav be hurt with this statement of Akshara.