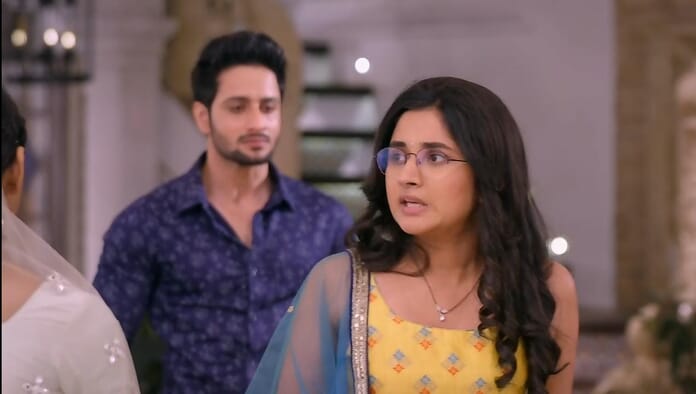 The episode starts with Agastya crying in his room. He gets frustrated. Choti guddan comes and sits beside him. She asks why are you worrying when Pushpa is recovering. Agastya says nothing is alright. Choti says I will make everything alright. She says we’ll leave this house. She tells Agastya to forget Badi guddan’s conditions. Choti believes Pushpa will be alright after she starts living in her own house. She says we all will be together again.

Agastya stares at Choti and he feels his chasmish is so innocent and can’t see Pushpa’s true colors. Agastya looks at Choti with so much love and picks her up. He tells her to sleep. He says Choti takes care of everybody. Now its his turn solve everything. He won’t let anyone hurt Choti. He decides to take a big step.

Badi guddan looks worried and she thinks how to stop Choti from leaving. Pushpa is not trustworthy. Agasthya comes bows down his head and says sorry to Badi guddan that he misunderstood Pushpa. He was a fool that he kept trusting his mother. Pushpa can’t change herself ever. I was wrong that she will be a changed person one day. She is mean minded and selfish as well.

Agastya says Badi guddan I wanted her to become like you but she doesn’t want to be like you. Agastya says he wont be weak anymore. He will make sure that Pushpa gets punished. He wants to take Badi guddan’s blessings. Badi guddan blesses him. He says now I will be called a good husband.

Next day, Pushpa says let’s go Agastya. She says to Choti that from now you will get what you want. Then Police enters the house and says there’s a charge of Domestic violence against Pushpa Birla as she tried to kill her daughter in law. So, she will get arrested. Choti Guddan gets shocked. She asks who filed complaint against mummy ji?

Agastya says Pushpa didn’t leave any option for him. He says Pushpa tortured his wife a lot and even tried to kill Choti Guddan. Arrest her. Pushpa says don’t touch me. She asks Agastya why did he file complaint against his mom? Why do you want to send me in jail? You loved your mother in law, your wife. But you didn’t love your own mother. You get separated from me. Pushpa starts crying and says no mother should go through such kind of pain. Inspector takes Pushpa with her. Choti goes to Agastya and says please stop your mother. Its wrong. Rashi too starts crying and says Agastya that please stop Pushpa.

Choti requests Badi guddan that please stop this drama. Please tell Agastya to change his decision, he listens to you. Badi guddan says its called justice. Which is finally happening. I will not stop Agastya. She says she is satisfied. Choti keeps on saying please dont do it Agastya . Agastya doesn’t say anything.