Angad sees Kalindi close with Madan trying to make him sit in the car. He comes in between them and pushes Kalindi aside and makes Madan sit in. He asks where are they going, she says Madan’s house. He asks if matters reached till house. He says he will drop them, he is also going that side. Kalindi asks where, he asks if she is interested in his life, Paridhi comes and calls him fp, future pati. She asks him to take her shopping. All four sit in the car, Angad see Madan, Kalindi laughing and talking backside.

Police checks the cctv footage to find about Madan, brahmarakshas.

Minty is writing letter to her sister as they are not getting much time to talk. She writes the story started with apple, she and Robin dashed into each other and apples fall down. She got attracted to Robin and started noticing his habits and everything. She is in love with Robin and feeling similar to what her sister is feeling for Angad. Minty sees the letter and thinks Kalindi will get confused reading this letter and drops the idea.

Angad stops the car near mall, Kalindi asks them to go, she and Madan will wait in the car. Angad offs AC and lectures about environment. Paridhi tells them not to think of Angad as miser, he is multi-millionaire. Kalindi says they will wait outside.

Shalini wonders where to put coconuts given by guru maa, she hears Shakti voice and hides behind pillar. Shakti asks Damini what problem she has with Paridhi, their birth charts matched, she is sanskari, educated, it better to bring her as bahu instead of a showpiece. Shakti tries to please Damini and both go out. Shalini sees coconuts white and sighs in relief as they are not brahmarakshas.

Angad, Paridhi, Kalindi, Madan go inside mall. Madan wheelchair doesn’t move suddenly. Kalindi bends down and tries to move the wheel, Angad also tries. She says it isn’t moving and asks Angad, Pari to go in, she and Madan will wait here. Angad slowly tells in her eat that if she doesn’t come in, he will tell Pari about herself. Kalindi says no, she will also come. Madan says no problem, he will wait here and asks Angad to move the chair to a side.

Paridhi boasts of being NRI and selects few dresses for trying, she goes to trail room. Angad says he wants sherwanis and asks Kalindi to come, they go to bridal section by mistake. Angad selects chunri and few jewelry for Kalindi, he takes her near mirror and puts the jewelry, chunri on her. He says she would have been his bride if not for her sacrifice. He asks why she likes weird men, first rakshas, now Madan. She asks how much he knows Madan to badmouth him. Angad asks how much she knows herself.

A girl wears red bridal dress and is talking to her fiance on video call, she says she is going to get it altered in basement and asks him not to cut the call. Madan stares at her and she goes away telling a man was looking at her weirdly. Brahmarakshas chases her in empty basement, she runs away in fear and throws a rod on his head. Angad, Kalindi and people gather hearing the girl voice. She says brahmarakshas is back, he will kill everyone and shows the video on her phone. She says don’t know how she got the courage, she threw steel rod on rakshas head. Kalindi and Angad go to check on Madan, Madan is on floor struggling to get up, he says brahmarakshas came here. Angad helps him get up, Kalindi places the wheel chair properly and asks Madan if he is fine. Angad sees red mark on Madan’s forehead and remembers the girl saying she attacked rakshas on head.

Minty and Sakshi argue about Robin. Shalini sees coconuts black and hears Prithvi talking romantically, he asks her to get ready in her wedding dress red color one and asks her heart. She gets afraid thinking he is brahmarakshas. She gets ready in white saree and few funny moments follow. Prithvi asks if she is thinking him to be brahmarakshas.

Angad goes to hospital to find about Madan’s recovery, doctor says its confidential. Angad hears the nurse talking to herself, no one is listening to her, he will come and kill everyone. Angad asks if she is talking about brahmarakshas but nurse goes away.

Madan, Kalindi come to his home, she sees his research about rakshas and asks how he stays here, everything is about brahmarakshas. Madan says he also wonders about that, he thinks a lot about brahmarakshas that he feels he is in its control, may be he is brahmarakshas. Kalindi says he jokes well. She asks about the book, he says its in that cupboard binded in red cloth. Madan tries to touch her from behind but Angad comes and stops him. Madan asks where he went from mall. Angad says he forgot something in car and goes out.

Inspector Shabana gets many calls about brahmarakshas, video is going viral. She sees clear screen of cctv video and gets shocked knowing who is brahmarakshas. She calls to Kalindi to alert her, Angad answers the call as phone is in car. She sends a location and asks him and Uma to come there. 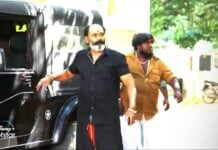 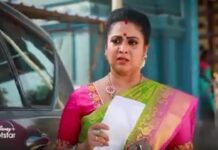 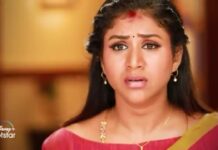