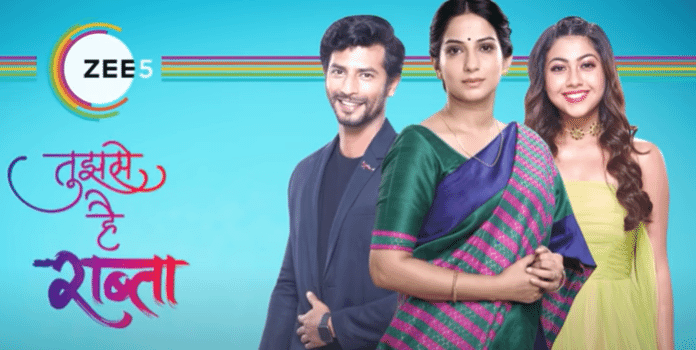 The episode starts with Family members asks what Kalyani is doing in outhouse. Kalyani sends the artist and shows Anupriya and Malhar tattoo designs on her hands to them. Malhar kisses his name on her hand. Anupriya asks what’s the need of it and why she beared the pain. Kalyani says this pain is good to me Anupriya. Anupriya asks why she is addressing her with name. Kalyani says she decided to address her with name like she used to call her mom with name tells her that both of them are equal to her. Anupriya gets emotional. Malhar asks Kalyani to come inside so she can drink the milk prepared by her Anupriya. Kalyani asks them to wait and tells to everyone that she wanted to remarry Anupriya and Sarthak on their 7th anniversary. Anupriya denies but everyone makes her agree.

Gungun sets the cupboard. Ajinkya calls her to play ludo with him. Gungun tells him she is vacating the cupboard to share her room with Kalyani baby but their is no space in it. Ajinkya tells her he have an idea and takes her to store room. Gungun says it’s very bad room. Ajinkya tells her how they have to change it for baby than both of them cleans the room and sets it beautifully for baby. Gungun thanks him.

Kalyani searches for the saree to wear in Anupriya’s marriage, that time she felt emotional seeing Moksh shirt. Malhar comes to room. Kalyani asks Malhar to come with her so they can get Pillu from hostel. Malhar says it’s not good to disturb his studies. Kalyani says she will talk with Moksh on video call. Malhar agrees. Kalyani calls Moksh and talks with him than she tells to Malhar that their Moksh is grown up. Malhar and Kalyani feels emotional thinking their moments with Moksh and how he united them. Gungun calls them saying Aaosaheb is calling them.

Malhar and Sarthak comes to Aaosaheb’s place like Groom family. Aaosaheb receives them and she asks Kalyani to bring Anupriya. Kalyani brings Anupriya to hall and she serves them tea. Kalyani asks they can ask questions. Sarthak question her but Kalyani answer their question. Malhar asks Kalyani to allow Anupriya to answer the question. Kalyani says she is my mother so answers are same because we are in one team. Malhar says this lady is doing over action and he rejects the alliance. Sarthak says he is accepting the alliance. Aaosaheb says alliance is fixed and she asks Kalyani to feed sweets to everyone.

Kalyani gets Anupriya ready. Anupriya asks from where she get these ideas. Kalyani says she missed to watch Madhuri and her Dad’s wedding but now I can see Anupriya’s wedding. Gungun praises her Mom look. Kalyani tells to Gungun that her parents are going to get remarried. Kalyani goes out get Gajra and where she gets to know jewellery of some temple is stolen than she remembers past incident.