Guddan Tumse Na Ho Payega Written Update 9th July on Justshowbiz.net
The episode starts with Akshat thinking about how much care Guddan has taken care of him and his family and now it’s his turn to take care of her. He promises that he won’t let her lack anything. He video-calls Guddan who is listening to the radio and apologizes to her for getting angry on her earlier. He explains that he is really worried about her and is missing her a lot. Guddan replies that she and their baby are missing him too. She blushes. Both Akshat and Guddan gets emotional. Akshat asks her not to take tension about anything as he will take care of everything. Guddan asks him who will take care of him then. He replies that he is fit and fine. Guddan makes him notice that his room is not fit and it shall be cleaned.

Akshat starts picking his clothes from the bed while the video-call is still on. Guddan notices a girl’s dress. Akshat tells her that the laundry guy must have mistakenly put it in his bag but Guddan is not ready to believe him. Akshat says that there is no girl there but just then a noise is heard. Akshat goes to check on balcony and sees that a vase has broken down. He thinks it’s because of wind. He goes back to Guddan.
Guddan complains saying that she will become fat now so he found a new girlfriend. Aksaht says that he will call the dry cleaner and clear everything but the call isn’t answered. Guddan starts laughing and says that she has no suspect on him but was just pulling his leg.
Saraswati’s informer is on the balcony. He messages Saraswati that the plan failed. Saraswati gets frustrated but then thinks about another plan against Akshat and Guddan. She calls his man and explains him what to do. She evilly laughs.

On the other hand someone cuts the gas pipe in Guddan’s kitchen. She is on video-call with Akshat when she hears a noise and tells Akshat that she feels like someone is keeping an eye on her. Akshat asks her to take rest and not overthink. Guddan says that she is hungry and wants to eat his Aate ka Halwa. Akshat says that he can’t make it but he will tell her the recipe. Guddan gets excited and says that she will make it for tomorrow’s competition as well.

Guddan goes in the kitchen. Akshat asks her to take medicine first and asks if she even knows what medicines she has to take. Guddan says that she isn’t a child.

Saraswati gets a call from his man who informs her that the work is done.
Guddan shows the medicine she has to take after an hour to Akshat who notices that it’s wrong but before he can say anything the call gets cut since Guddan’s phone is not charged. Guddan complains about Akshat making her continuously angry. Akshat is worried that Guddan may take that medicine.

Guddan puts her phone on charge. She smells something strange in the kitchen but then thinks to take medicine before doing anything. She is about to take the pill when she gets Akshat’s call. Akshat scolds her saying that she is crazy but Guddan starts yelling on him and doesn’t listen to him. She cuts the call and puts the phone on silent.
Akshat gets worried recalling Guddan saying that someone is keeping an eye on her and telling him about the strange smell in the kitchen. Moreover the medicine she was about to take is expired. He feels like something wrong might happen to Guddan and calls her but she is keen on not talking to him.

Guddan tries to light on the stove but the matches don’t work. She looks around for lighter and finds it. She is about to light it on when she hears on radio that Akshat has left a message for her. He wants her to pick up his calls since he is missing her. A romantic song is played on radio for Guddan.

Guddan goes to check his phone and calls Akshat. The latter asks her if she is ok. Guddan asks her not to panic. Akshat asks her to turn off the regulator of the gas. Guddan does that. Akshat tells her that someone wants to harm her.

Saraswati is frustrated since her plans keep failing. She gets Ganga’s call. Ganga asks her with whom she was talking. Saraswati lies that she was on phone with her old friend. Ganga doesn’t believe her and asks her to tell the truth.

Akshat explains Guddan that the medicine she was about to have is expired. Guddan checks the medicine and gets shocked seeing that it’s really expired. Akshat says that his doctor friend Rishi can’t do such a mistake so all the incidents can’t be a coincidence.
Ganga warns Saraswati saying that she shall not try to harm Guddan. She scolds her and cuts the call. Saraswati is angry.
Guddan gets scared. Akshat asks her not to worry and suggests her to shut all the windows. He says that he will call the police. Guddan is tensed so Akshat tries calming her down saying that he won’t let anything happen to her and their baby. He asks her to throw the medicine while he will call Rishi and get new ones.

After they cut the call, Guddan walks in the house slowly as she is really scared. She shuts all the windows and doors. She swears to find the one who is planning against her and Akshat. She feels restless thinking that Akshat might be in danger. At the same time, someone hits Akshat on head and he falls on the bed unconscious. 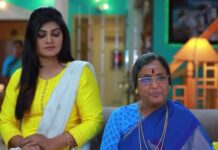