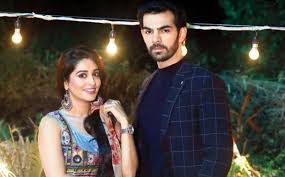 Kahan Hum Kahan Tum has started only few months from now but it has already given us so many ronakshi(Played by Karan Grover and Dipika kakar)moments. Fans really adore and cherish these moments. They share both a funny and romantic memories.

We have brought you some of the unforgettable and wonderful moments that had occured between Ronakshi.

This was that moment when Sonakshi had to perform in pari and Pooja’s fashion show then suddenly Sonakshi’s dancing partner was unavailable to come up on the stage. Here, in the backstage Rohit was present and someone just pushes him on the stage thinking him to be the dance partner of Sonakshi. Eventually, Sonakshi and Rohit end up giving a wonderful performance. During the dance, Sonakshi’s ex boyfriend tried to harm her by increasing the fire of fire cracker that was present on stage. But Rohit saved Sonakshi and got himself little burns here and there. Later on , Sonakshi thanked him. This was one of those cute monents which was in the very initial phase of Ronakshi.

After Rohit went to Sonakshi’s set as her bodygaurd, Sonakshi was very surprised. So, she in return thought of this cute prank of pretending to be Rohit’s new car driver. Sonakshi adorns the get up with beard. Rohit thinking him as the driver asks his name and everything. Just when, Sonakshi tried to set her prank, Rohits notices Sonakshi’s hand so this ends up Sonakshi’s plan as a flop plan. Ultimately Sonakshi gets to know that Rohit is playing her instead so she again starts another prank. Ultimately, at the end both have a cute laugh and end up spending some romantic time together.

On Ronakshi’s engagement day, Sonakshi gets molested by Mahesh( her obsessed fan). After the incident Sonakshi is really traumtised and her engagement clothes get torn. She kept on crying and Rohit made her stop crying and said he will handle everything. Then Rohit arranged a new set of dress for Sonakshi. Rohit made Sonakshi ready from top to bottom. He did his makes up, put on nail paint and then made her ready with jwelleries. This scene shower the couple’s sizzling chemistry. They shared lot of romatic eye- contacts. This was one of those romantic moments fans keep waiting for.

Ronakshi gave an amazing performanve on their sangeet. Rohit who is shown as a non dancer, learns dance moves from Sonakshi so that Sonakshi is happy. Then finally when they both performed on stage they filled the moment with awws. This couple perfectly set the stage on fire. The song they performed on was ‘Ve Mahi’ from kesari.

Dinner of Ronakshi before haldi

Just one day before their wedding, Rohit plans to take Sonakshi on a dinner date. Rohit was going to pick Sonakshi up but she already came to Sippy Mansion for some other work. Then, Sonakshi asks Rohit instead of going out why dont they eat something that Rohit cooks for them. Rohit is startled as he doesnt know how to cook but as Sonakshi, the love of his life, wanted to eat something he cooks so agrees for her happiness. Then they happily eat, talk and spend some very cute time together.

When Mahesh exchanges Rohit’s used haldi with his used haldi to be put on Sonakshi , just then Rohit comes to Sonakshi’s house with the correct haldi bowl. After the haldi is over Rohit brushes his cheeks past Sonakshi’s and wishes her happy haldi. Then they smile and have cute moment.

We hope to find more such romantic and cute moments between our lovely couple Ronakshi! Let us know in comments what are your favourite Ronakshi moments?