The episode starts with Yazhini serving Kavin dinner. He thinks if he have dinner here, how he can eat food made by Venba. Yazhini goes to kitchen to bring chutney. Kavin puts back the idlis in hotbox. Yazhini serves him chutney. He praises Yazhini. The latter serves him again. Kavin feeds Yazhini the idli. Yazhini says Mallika aunty is there. She coughs. Kavin makes her drink water. Mallika gets happy seeing them. Kavin leaves for his room. Yazhini happily hugs Mallika.

Ravi is waiting with his bike outside Kavin’s house. He phones Kavin. Ravi asks him to come out. Kavin arranges the pillows as he’s sleeping. He comes down holding the pipe. Ravi asks Kavin why he wants to go to Venba at this late night. Kavin says she got to know through his sister that Venba couldn’t sleep last night. She might not got sleep as it’s a new place or she might be worried about Saradha or him. He further tells Venba loves him. He wants to stay with her and support her. Ravi says his intention might be good yet he’s doing wrong. He asks him to reveal the truth to everyone as soon as possible. Kavin says he will reveal the truth once he saves Venba’s dad. He says he will drive the bike.

Kavin and Ravi come home. Kavin asks Venba to serve food fast as he’s starving. Kavin asks Venba to feed him. Venba first refuses. She then notices scratch on Kavin’s elbow and she gets concerned. She tears her shawl. She ties it on his injury. He asks how he got hurt. Ravi says he got hurt while coming down to meet her. Venba asks how he will eat with an injured hand. Ravi asks her to feed him. Venba starts feeding Kavin. She asks what’s the need to come to meet her taking such risks, he could have messaged her that he couldn’t come.

Kavin says he has got to know that she couldn’t sleep last night so he doesn’t want to leave her alone so he came. He then asks her if she talked with her chithi. Venba says yes but chithi wanted to talk with her friend Valarmathy and asked to make a video call. Kavin says Ravi’s sister karthika will act as her friend Valarmathy. Ravi and Karthika look stunned while Venba gets happy. She continuous to feed kavin.

Karthika tells Venba that she goes to her room as her husband has come. Venba looks at her stunned. Ravi teases Kavin. Ravi and Karthika leave. Kavin tries to get romantic with Venba. Venba glares at him. 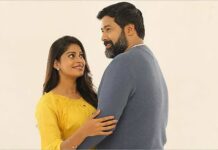 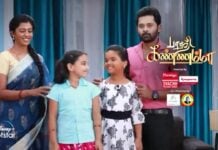