Today’s episode opens with Saumya coming back to home. Roma asked what happened to her. Saumya goes to her room. Mallika goes to check. Roma stops Kareena from going inside.

Saumya hugs Mallika and cries. She says her decision to become Trans-genders leader was wrong. She tells Mallika about the incident that took place at Vedant’s house. Saumya says she only loves Harman and no one else. She says she can’t bear anyone else loving her apart from Harman. She cries. Saumya says she wants to go back to Harman, as she can’t live without him anymore.

Harman drinks and talks with the toy considering her as Saumya. He pours his heart out saying she betrayed him badly and continues drinking. Otherside, Saumya pours her out with Mallika saying she can’t live without Harman and realizes her mistake. Saumya asks Mallika to help her out so that she can go back to Harman. Mallika consoles Saumya. There, Harman says his and Saumya’s love story ended because Saumya is a cheater. Harak and Preeto hear him.

Vedant says seeing Saumya’s picture that he will make Saumya his wife by any means. He thinks of a plan.

In the morning Malliks calls all the Trans-genders and ask them to let her free from her responsibilities. Saumya too pleads them. Mallika tries to convince them. Some other leader comes and supports Saumya. They freed her from her post. Mallika asks Saumya to go back to Harman and Harak.

Precap: Harman says Vedant trapped him wrongly. There, Vedant gets happy thinking his plan is successful. He waits for Saumya to come and ask for help. Saumya comes Vedant says he will help her in freeing Harman on one condition. Saumya gets shocked. 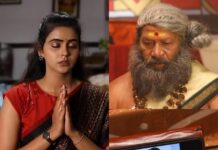