Today’s episode starts with Rohan and Soham calling out for Preeto. Soham informs Preeto that tomorrow there is fancy dress competition in the school. Saumya ask who will become what.

Heer says to Preeto that in a school fancy dress she wants to become bride. Saumya recalls her childhood. Preeto stands shocked.

Preeto gets angry on Heer and says she will not become bride. Heer says to Saumya that she wants to become bride. Mahi ask Saumya to tell Heer and don’t lie else she won’t be able to trust her ever. Rohan and Soham insist Preeto to let Heer become bride.

Preeto says no and gestures to go. Heer says to Preeto if Harman would have been here than she wouldn’t have said no to her. Preeto stops. Heer prays to God to return her father. Harak allows Heer to become the bride. Preeto refuses,   Saumya ask Preeto to allow Heer to become bride.

Heer ask Saumya to come with her for shopping. Saumya ask Preeto to take Heer for the shopping. Mahi ask Saumya why she is destroying Heer’s life by giving her false hopes. Saumya says she can do anything for Heer’s happiness.

Preeto takes Rohan, Soham and Heer for the shooping. Heer sees magic show stall and insist Rohan to take her there. Preeto gets busy on call. Heer goes to see Magic show.

Rohan and Soham, Preeto looks for Heer. Heer gets lost in seeing in the magic show. Preeto meets with Rohan and Soham and scolds them for leaving her hand.

Police comes and scolds magician for gathering the crowd. He further ask people to move on. Heer calls out for Rohan and Soham.

Vedant hears Heer’s voice and looks at her. Vedant thinks Heer will be the medium for him to reach Saumya. Preeto, Soham and Rohan come to the spot and see no one there. A man out there says police asked magician to pull off his stall.

Saumya rushes to find Heer. Heer calls out for Rohan, Soham and Preeto. Vedant follows Heer. Mallika and other kinnars see Vedant. She asks them to catch Vedant. Vedant runs away.

Heer recalls Saumya’s word. Saumya in flashback tells to Heer that if ever she is lost than she should wait for her in the temple. Heer hears temple bells.

Saumya ask a man is there any temple around. Saumya goes inside the temple and looks for Heer. She prays to God to return Heer. Heer hears Saumya’s voice and runs towards her. Saumya gets happy and hugs her. (Episode Ends) 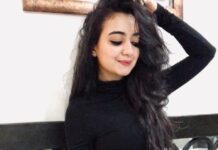